An invitation arrived in March to experience an historic lodge in the Jackson Hole area and its surroundings in snowy, late-winter glory. I admitted that as a Jackson local, I had yet to make the hour and a half drive during summer, fall, or winter to the remote guest ranch. I had long heard about the place and the awe it inspires in visitors, so I thought was about time to experience it for myself.

And that was precisely my reaction after being scooped up in the lodge’s snowcoach, transported five miles north off the highway through a wintry wonderland, and led into the lobby for the reveal of this 25- acre ranch situated next to its namesake 300-acre alpine lake at an altitude of 9,200 feet amidst two million acres of Shoshone National Forest. I stood there, spellbound. I suppose the most efficient way to describe my astonishment would be to say that those numbers signify space and plenty of it to explore and enjoy the beauty of the wild while indulging in the tradition of the lodge’s Western hospitality. I instantly felt connected to nature and comforted by the property.

General Manager Matthew Tousignant described the lodge’s history and ownership to me while pointing out its Western Craftsman architecture throughout the lobby, Cowboy Bar, and Tea Room. The rooms are tastefully appointed with original massive stone fireplaces, large antler chandeliers, and robust leather sofas juxtaposed with shuffleboard, darts, and large scale maps of the area. Matthew steered me into the masterpiece, the Great Room, where a fire crackled below a prominently displayed elk mount. I listened as he described the stunning artwork by nationally recognized artists Scott Peters, James Wilcox, and Scott Christensen that enhance the century-old dining hall, willing myself to remember each piece. Looking at the room’s scale, it was hard to imagine that the entire structure had been constructed in less than four months during a flurry of building to accommodate affluent Easterners who would spend the night before heading to Yellowstone National Park. The Lodge is listed on the National Park Services Register of Historic Places and was built in 1922 and was known at the time as the Two-Gwo-Tee Inn. 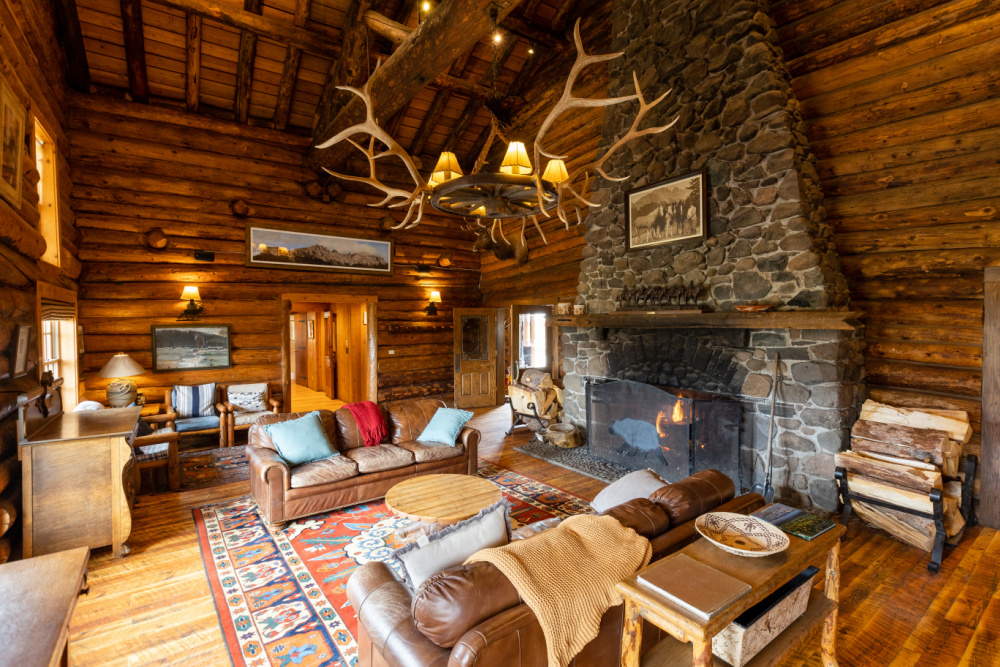 This palpable sense of history continued to the dining room—a place where vivid characters have dined and danced through the years. As a foodie, I was a little more than preoccupied with anticipation for my first meal in the Lodge. Many have agreed that Brooks Lake Lodge serves up “the best meal in the middle of nowhere” and my appetite was getting stronger by the minute. But I practiced culinary patience while Matthew handed me my cabin key and confirmed the snowmobiling adventure the following day.

In fewer than 15 minutes on site, I knew there was more to the Lodge than clichés might suggest. Sure, there was my heady first impression of its atmosphere, the staggering backdrop of the Pinnacle Buttes, and its storied heritage as a National Historic Landmark. But it was Matthew’s warmth, his command of facts, and his quick-witted nature that set the tone and offered a refreshing reflection of the overall ambiance at Brooks Lake Lodge.

I couldn’t take my eyes off the view as I entered the two bedroom cabin and set about organizing skis, boots, books, and a small duffle. Apparently, neither could owner Bryant B. Brooks, the seventh governor of Wyoming. He was as wide-eyed in 1922 when he opened the Lodge as I was in 2022 when I walked out on the cabin deck to photograph the late afternoon’s fairy tale scene canopied in muted whites and grays. I wondered how many people had felt carried away by the same view. 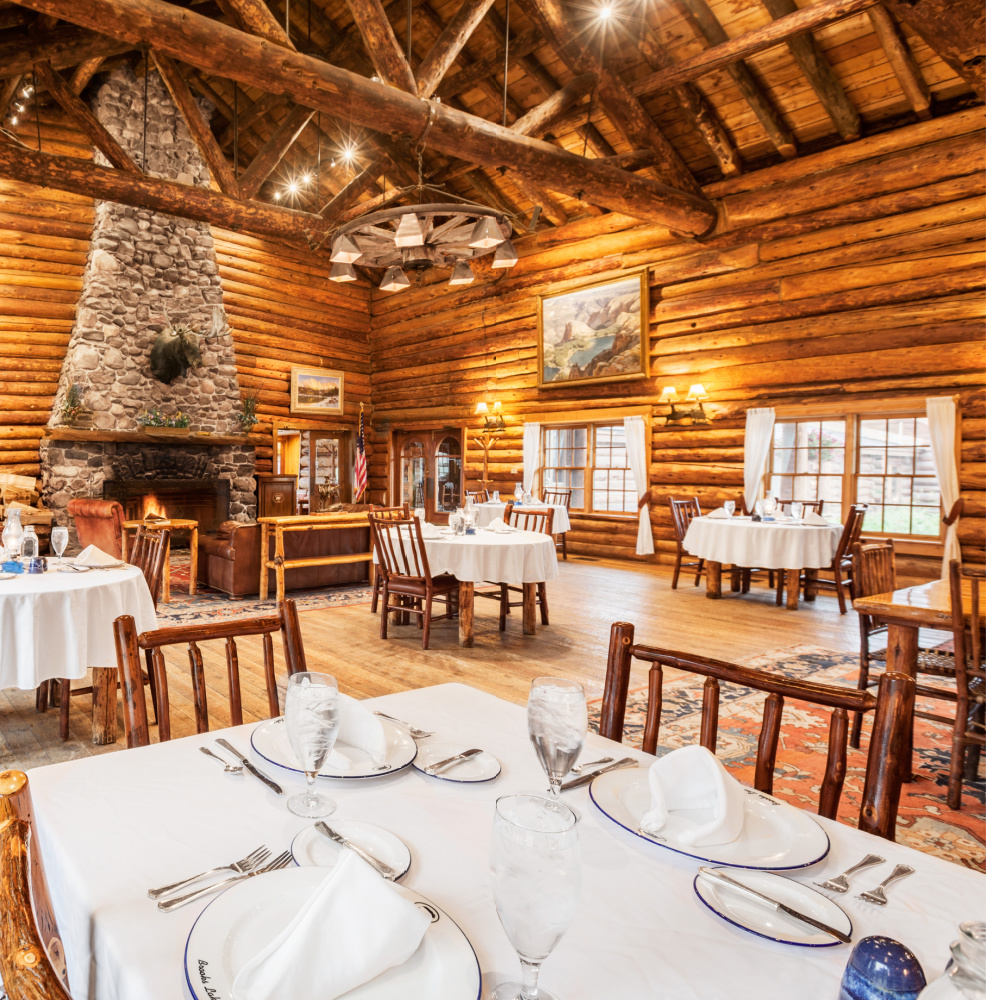 Back inside, I swapped boots for slippers and noticed the details that create an authentic Western design. Flush with handmade lodgepole pine furniture, the spacious cabin is liberally fused with life’s little luxuries—beds dressed in fluffy comforters, snuggly robes, thoughtful bath products, a wood-burning stove, and an ample kitchen area stocked with coffee, tea, and chocolate.

Next, my longtime plus-one and I wanted to spend time in the spa before dinner. Aside from thinking about how much I wanted to experience at Brooks Lake Lodge, I also wanted to take a crack at rejuvenating. I knew that without a television, cell service (high-speed wifi is available), and playing “Whack-a-Mole” with email, there was a good chance I could squeeze in a soak or meditation.

The Rocky Mountain Spa, an addition, was constructed to mirror the Lodge’s architecture—grand and welcoming. The double-height space, dubbed the Tranquility Room, showcases its central 35-foot river rock fireplace accompanied by bold leather seating and an intimate bar area for chilled water, hot tea, and snacks. Adjacent to it is an ample fitness center, dry sauna, and two treatment rooms with options for Togwotee Hot Stone, Reiki Energy Healing, and Jade Lake Deep Tissue Massages. However, the main attraction is the oversized 11’ x 14’ hot tub and its placement just outside the spa, which faces the dramatic range—the finest position this side of the Mississippi to sip and soak.

Changing from jeans to another pair of jeans, we headed to the glowing lodge for drinks and dinner. It must be said, and profusely if necessary, that neither of us was prepared for the level of culinary creativity nor the excellent care in sourcing ingredients, which I learned come from partnerships with local farms and purveyors. I will reiterate that this place is miles from provisions, yet everything was fresh, tasty, and beyond our expectations. We both savored our beautifully prepared fish and vegetables and the “I can’t stop eating this” dessert between the lovely wine and mindful service. Throughout my stay, I understood that a position at Brooks Lake Lodge is more attuned to a longstanding agreement of E Pluribus Unum (out of many, one)—each working member is distinctly personable and represents the property with confidence and charm. 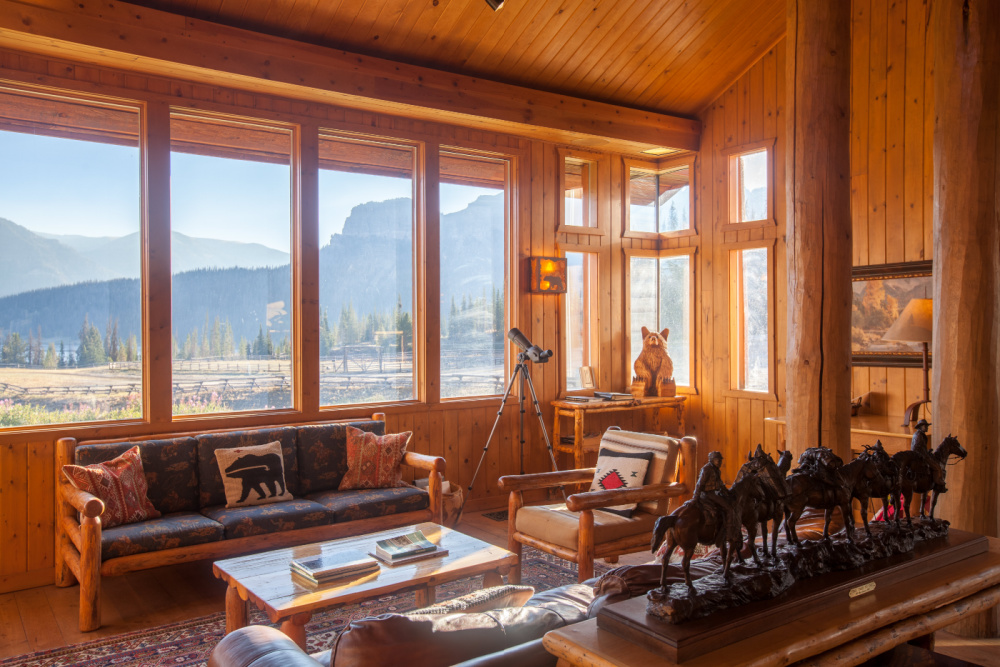 A vivid bluebird day replaced the gray patchwork of silvery fog and gauzy clouds of the day prior. After a stealthy blaze of a breakfast including made-to-order eggs, toast, and coffee (we respectfully declined omelets and Bananas Foster French Toast, knowing lunch was less than a handful of hours away), we visited the sled shack for helmets and gloves. Then, it was time to learn the basics and safety of snowmobiling. We experimented with steering and maneuvering with our endlessly patient instructor before he guided us through the myriad of groomed trails that surround the property and extend for hundreds of miles in a world-class trail system that lures newbies and seasoned sledheads to this snowmobiling Xanadu. In and out of the dense evergreen forest were wide-open expanses that tested our need for speed while rolling hills challenged our courage. The exhilaration at attempting a new sport, giggling through the butterflies, and the prospect of convincing our significant others of wanting to buy a four-stroke filly of our own left us reeling with laughter.

Around noon, we were reminded of lunch and answered with orders for Caesar salads and crispy fries. Soon after, we crosscountry skied across the lake in sublime conditions—that is, if you brought the correct skins for your touring setup! However, an act of God wouldn’t have prevented us from idolizing our speck-size on the frozen lake fringed by incomparable peaks. We gawked, videoed, and stood in wonderment at our whereabouts, reminding ourselves to appreciate our mere existence as the sun warmed our bodies and clouds drifted by in a serene sapphire sky.

Our second dinner eclipsed the previous night with a spicy veggie-centric gluten-free pasta and another memorable dessert. Sitting at the bar for an after-dinner drink with an assortment of staff who filled us in on what happens in the summer— horseback riding, hiking, fishing, and canoeing— gave us reason to plan our next visit. As equestrians, we loved hearing about the trail rides and overnight pack trips and traded horse tales until midnight. 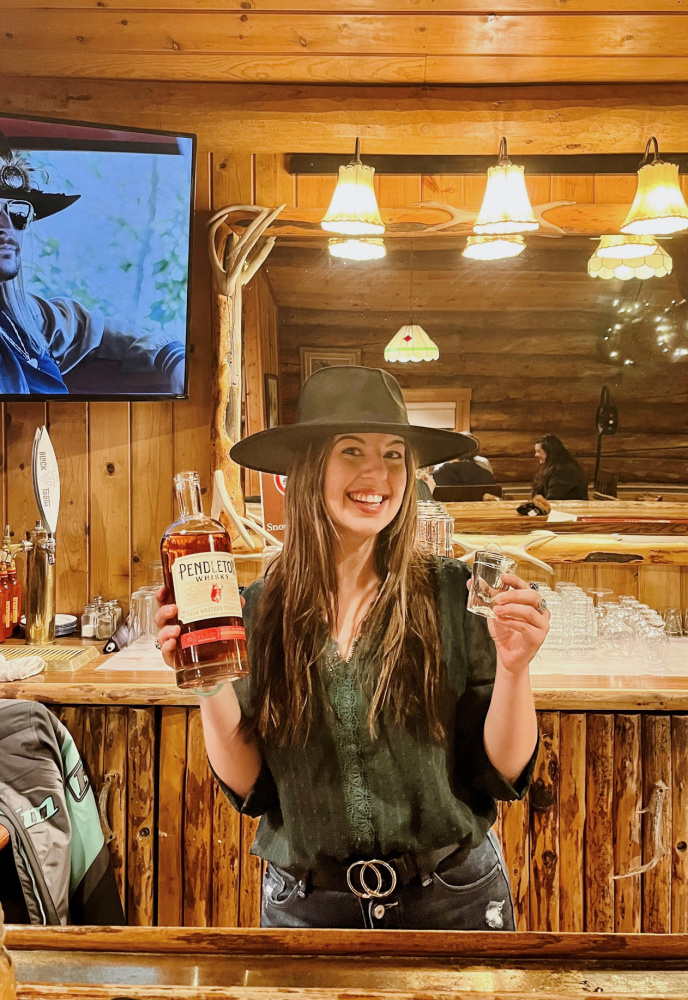 Returning to the cabin in the starlit snow felt dreamy, and another incredible day was followed by a restorative night of sleep swaddled in a down-filled duvet near a cracked window letting in the cool night air. These days, silence is a new luxury.

We woke up early and were eager to snowmobile before our departure. We felt prepared to go out on our own with newfound knowledge of the trails near the Lodge. A few hours later, blessed by the optimism that being in nature can offer, we said goodbye to our Brooks family, promising to return.

Four months later to the day, I made good on my promise and greeted the same staff in the lobby to celebrate the Lodge’s centennial on July Fourth weekend. The free and open-to-the-public celebration drew over 150 guests, allowing them the opportunity to tour the ranch and “peek behind usually closed doors.” The ranch looked just as spectacular in summer as in winter, with canoes sliding across the lake, kids trying their skills at archery, groups of adults relaxing under the eaves with platefuls of barbecued ribs and burgers, and a corral of live horses as the season’s horsepower.

I joined old friends and new ones on the lawn, slurping the Lodge’s classic cocktail, a lip-smacking Huckleberry Mule, thinking I’d coin this place as having the ideal combination of hi-lo luxury, and by that, I mean “hi-”as in historical and “lo-” as in local. It continues to thrill its guests and visitors with its history and local characteristics (people and place) and achieves that while preserving its purpose as a luxury destination like no other. 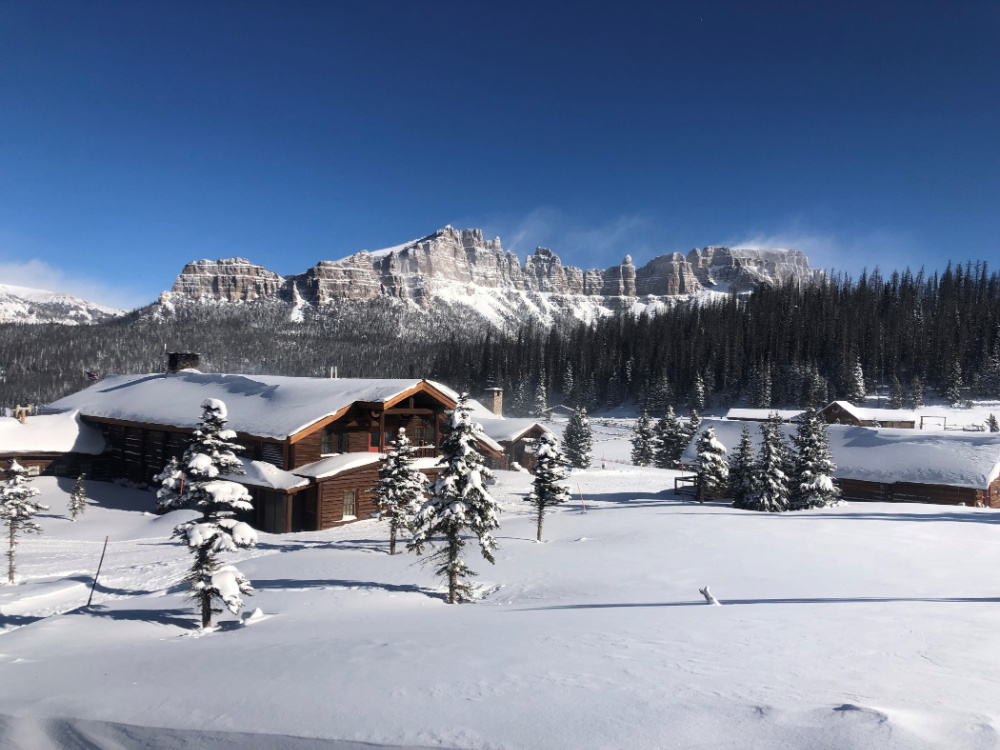 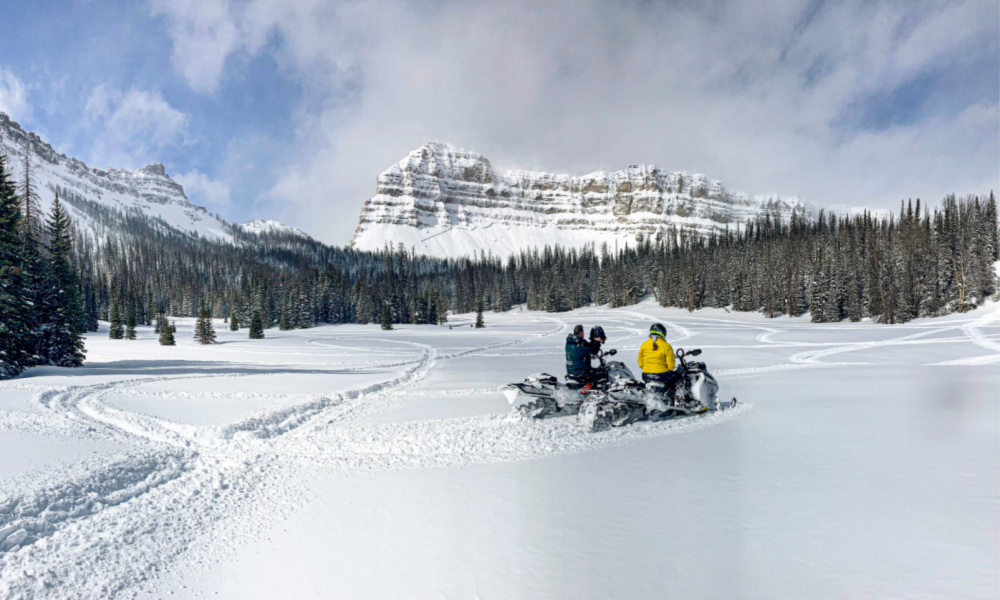 From the National Registry of Historic Places: Even before the designation of Wyoming Territory in 1868, wealthy Easterners and Europeans had come to the West on hunting and exploring expeditions. Probably the most spectacular of these jaunts was that of the Grand Duke Alexander, third son of the Czar of Russia, who came out in 1872 to hunt buffalo in two sleeping cars, a diner, and a refrigerator car stocked with grouse, quail, and caviar; the Grand Duke was guided on the hunt by Civil War hero General Phillip Sheridan and was assisted by General George Armstrong Custer, Buffalo Bill Cody, and some 1,000 Sioux. 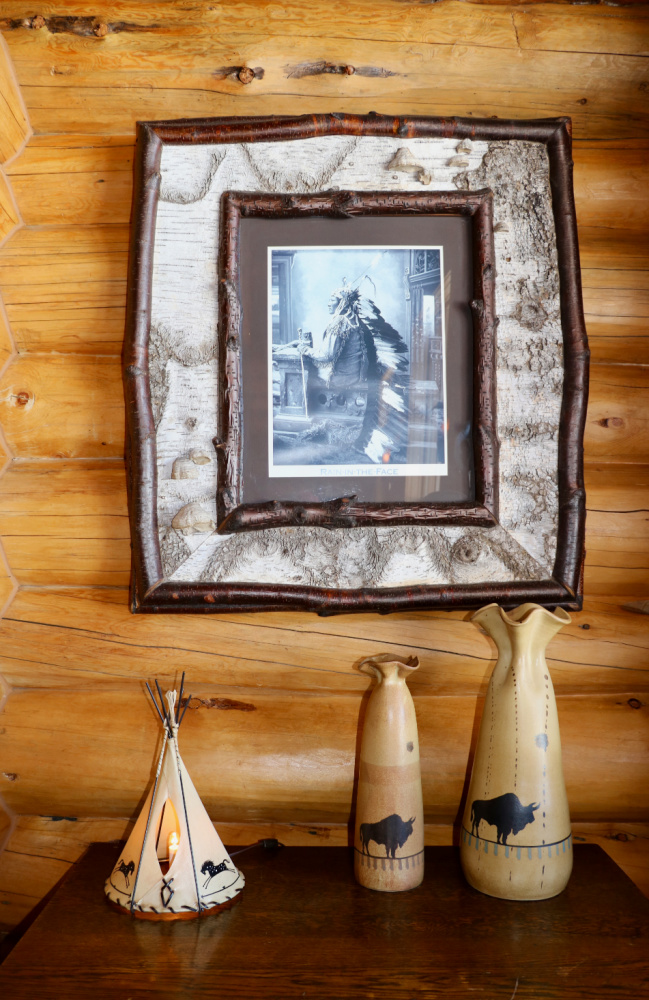