There are no winners or losers at the Baldy Banked Slalom. Yes, there are technically podium placers based on timed runs, but this event is about so much more than that. It’s about bragging rights, making bets with friends, drinking beer and eating hot dogs at the top and listening to announcer Andy Gilbert interview participants while commenting on boarders getting “deadliest catch”, aka caught in the nets surrounding the course.

Now in its 9th year, the fun Baldy Banked Slalom (BBS) is a qualifying event for the even bigger and better Mt. Baker Banked Slalom, held since 1985 in February in Washington. Racers of both sexes and all ages sign up for one of the BBS’ categories—Next Gen, Youth, Amateur, 35+, and Pro-Open—and are given the best of two runs. This year’s race included run times available in real time with the app Its Your Race and Idarado Media also included times on their Instagram. 155 racers participated with the majority falling into the categories Pro-Open Men and 35+ Men. 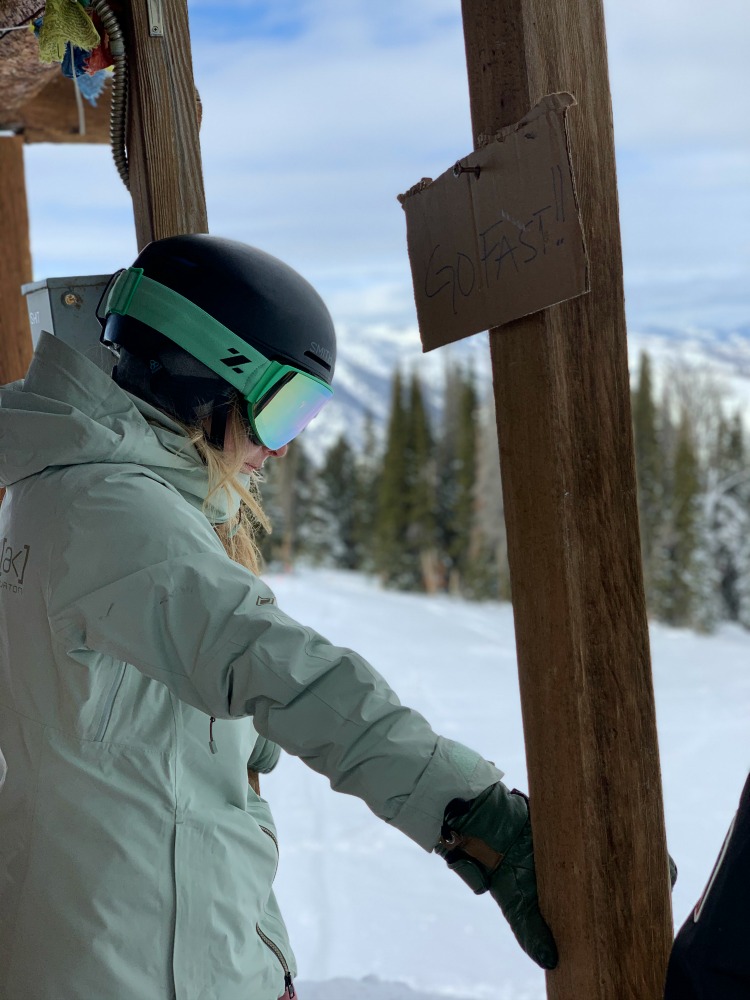 Racers started practicing for the 10am event an hour before, getting out the kinks of the race course. One early racer reported a tree well to be wary of on the course. Participants lined up at the top of Warm Springs, milling about, drinking beers, eating the free hot dogs someone had thrown on a grill, adjusting their board at the tune station, listening to Gilbert make announcements and funny proclamations and enjoying tunes from Anthrax to Justin Timberlake on the playlist that allegedly is used every year.

“The Baldy Banked Slalom is great because you can have the best freestyle rider in the world with the best racer in the world and the slalom just levels the playing field,” Gilbert said over the speakers at one point. A snowboard coach for the Sun Valley Ski Education Foundation for almost three decades, Gilbert knows many of the riders from every age category, either from being their current coach or coaching them long ago. Both Gilbert and his son Angus—aka “The Goose”—raced in the Slalom. 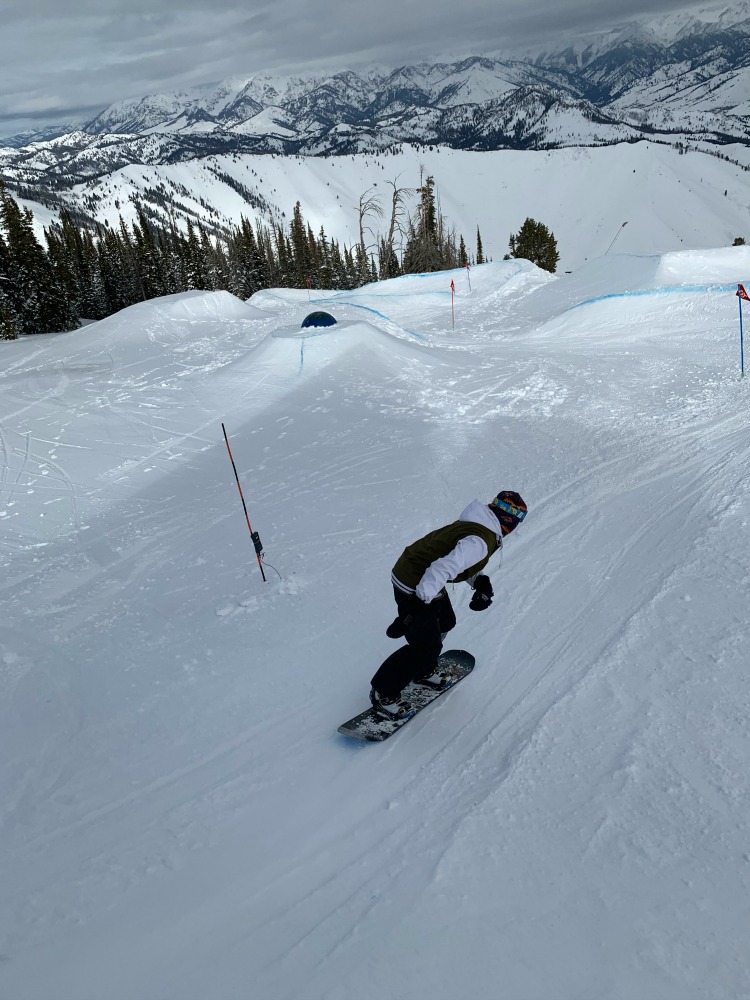 To get some of the real dirt on this event, I spoke to some of the men who have been doing this for years and are hometown favorites. Banks Gilberti, a professional skier who annoyingly is just as good on a snowboard as skis, has done the Slalom the past four years and local C. Gordon Knight has been doing it for six. Both were competing in the Pro-Open category but emphasized that the race is more about the bragging rights and “good trash talking” according to Knight. In the past, wagers have been made on the event with losers having to get nose piercings, take a river dip, or having to clean the kitchen for a month in the case of a wager between Knight and his roommate one year.

Gilberti shared a story from one Slalom—a story that clearly still irks him—of taking his run and falling after Knight and a friend popped up behind a berm and screamed. This year, shenanigans were limited and wagers were mostly for money or drinks.

The race itself lasted from 10am-3pm with each category going twice and ending with a “Switch Race” where racers ride switch down the course. One brave soul even rode a snow skate down the course. 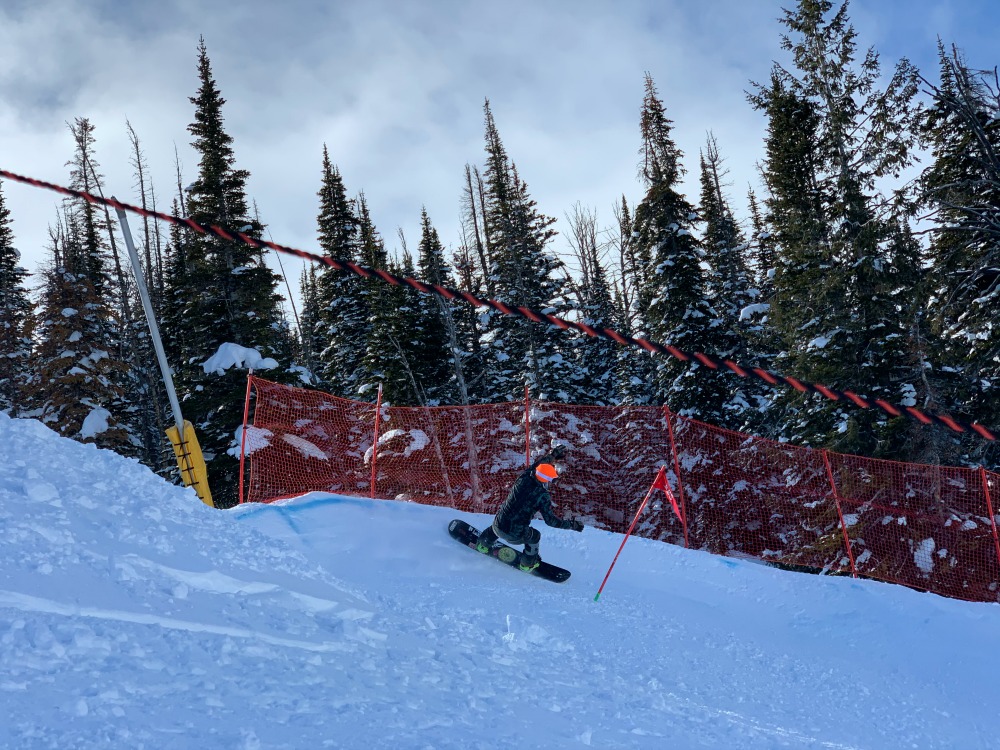 In the end, Dash Kamp took the Pro-Open Men’s first place with a time of 0:45.11 and Zeia Rose took the women’s at 0:49.63. The ultimate prize in the BBS is a place at the Mt. Baker Slalom but other prizes include a Traeger Grill, a snowboard, and other swag. This year’s awards ceremony was held at the Mtn. Haus in the former Hot Water Inn location at the base of Warm Springs and featured drinks from The Boho Lounge and music by local DJ Joey Sides. baldybankedslalom.com